Henry Jenkins Oct 14, 2021 Henry Jenkins
Since 2006, Henry Jenkins's Confessions of an Aca-Fan blog has hosted interviews in which academics, activists, and artists have shared their views on the changing media landscape. For the first time, Jenkins - often called "the Marshall McLuhan for the twenty-first century" - compiles some of these interviews to highlight his recurring interests in popular culture and social change. Structured around three core concepts - culture, learning, politics - and designed as a companion to Participatory Culture in a Networked Era, this book broadens the conversation to incorporate diverse thinkers such as David Gauntlett, Ethan Zuckerman, Sonia Livingstone, S. Craig Watkins, James Paul Gee, Antero Garcia, Stephen Duncombe, Cathy J. Cohen, Lina Srivastava, Jonathan McIntosh, and William Uricchio. With an introduction from Jenkins and reflections from each interviewee, this volume speaks to a sense of crisis as contemporary culture has failed to fully achieve the democratic potentials once anticipated as a consequence of the participatory turn. This book is ideal for students and scholars of digital media, popular culture, education, and politics, as well as general readers with an interest in the topic. 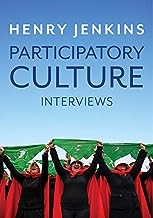